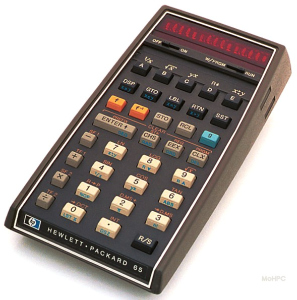 In order to raise enough money to buy parts and build the first few orders of the Apple I, Steve Jobs sold his Volkswagen van and Wozniak, then an HP employee, sold his Hewlett-Packard 65 scientific calculator for$500.

Those born after 1990 might be surprised that a mere calculator would raise any kind of capital, but back in 1976, a scientific calculator cost as much as a laptop does today, and the HP-65 was in fact marketed as “the smallest programmable computer ever.”

Wozniak got a decent price considering it retailed for $795, and we imagine any calculator in his possession would have been more than fairly well used. We wonder if the buyer knew he was getting a piece of computing history — just imagine how much that calculator would fetch on eBay today. 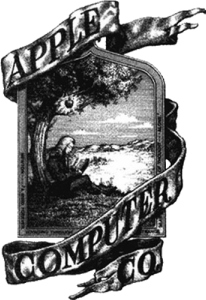 Although the now-retro rainbow logo is arguably Apple’s most well known, the very first Apple logo featured Sir Isaac Newton sitting under a tree, with an apple about to hit his head. (Legend has it that he was literally hit on the head with an apple and that led to the concept of gravity.)

The Newton logo was designed by the lesser-known Apple founder Ronald Wayne (the guy who sold his stake — that today would be worth $22 billion — to Steve Jobs and Steve Wozniak for $800 – ouch!) and was only used briefly in 1976, since its high level of detail didn’t really show up that well when shrunk down and stuck on a product.

The rainbow apple, designed by Rob Janoff, replaced Sir Isaac and remained the symbol of the company for many years until the simpler monochromatic apple logo was introduced in 1998.

GizmoCrazed - March 5, 2018 0
You can’t see the bunny, but the picosecond laser certainly can. In a lab at Stanford, engineers have set up a weird contraption, hiding...