Ever heard of “Dogcow?” Early Apple users probably have, as she — yes she — was included in the Cairo font as part of the original Macintosh. After the Cairo font was discontinued, Dogcow lived on with LaserWriter Driver 4.0 and then became a sort of mascot for the Apple tech staff.

Designed by Susan Kare, Clarus — Dogcow’s given name — makes a “moof” sound and was found on all versions of the Mac operating system until OS X. In the late 1980s, she surged in popularity and started to be used by other developer groups — even Microsoft once used Dogcow in an advertisement.

As you could guess, Apple was none to fond of this, and the tech staff decided to write a Technical Note to stop the misuse. Later on, Technical Note #31 was included on the first Apple Developer CDs as an Easter egg, and Apple even registered trademarks for both Clarus the Dogcow, and her “moof” sound. 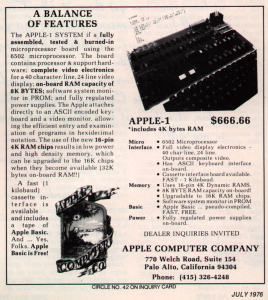 The high prices of Apple’s current computers have recently been among critics’ biggest complaints. But historically speaking, Apple products have always boasted a higher a price tag. In fact, when you account for inflation, back in the day, the very first Apple computer would have been more expensive than the MacBook Air or even a 17-inch MacBook Pro today.

The Apple I wasn’t priced at $666.66 with any Satanic connotations, but rather for more practical reasons, asSteve Wozniak once explained at a news conference:

“I was into repeating digits,” he said, and explained that the wholesale cost to stores was $500, and adding a third to get the retail price made it around $667, which Woz changed to all one repeating digit — $666.66 — “was just easier to type.”

Stick to your New Year's Resolutions with these classes, products, and...

For Nervous Californians, Fire-Proofing Is a New Obsession