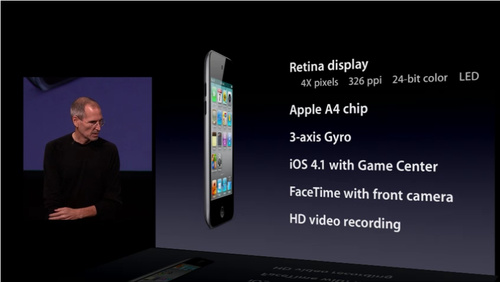 Steve Jobs(Co-founder & CEO of Apple) has revealed a new version of iPod Touch that’s on par with the iPhone 4.

The new iPod touch is like an iPhone 4, without the phone part. Even thinner than the original, has a 326ppi Retina display, Apple A4 processor, gyroscope, and a digital camera, both on the back and for FaceTime.

Differences with the previous generation & the iPhone 4:

The most obvious differences with the previous generation are the two cameras, a very welcomed & demanded—addition to the iPod touch. However, while the back camera can record H.264 video at 720 lines of resolution (720p) and 30 frames per second, the resolution for photography is not as high as the iPhone 4. Just the same 960 x 720 pixels of the video, far from the gorgeous sensor of the iPhone.

The front camera is also identical to the iPhone 4, capturing VGA at 30 frames per second for videoconferencing action.

Apple also claims they have increased the amount of playback time to 40 hours of audio and 7 hours of video, all while making the package smaller than the previous generation: Just 4.4 x 2.3 x 0.28 inches.

For comparison, the previous generation iPod touch was 0.33 inches thick. The weigh is also down to 3.56 ounces (101 grams), from the previous 8 ounces.

GizmoCrazed - August 4, 2016 0
In the age of the internet, the world's information is simply at the tip of your fingers. With such a wealth of information available, the...

BMW's autonomous concept car of the future was cool, I guess