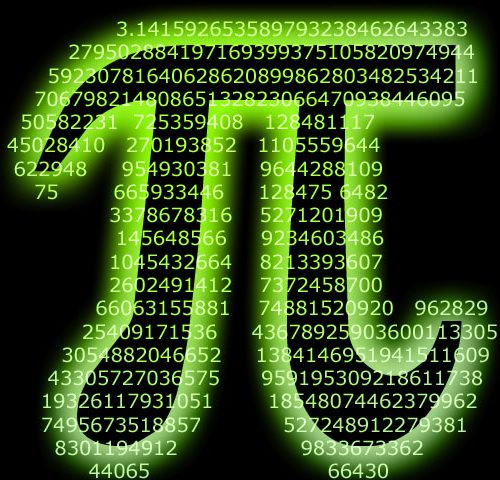 To calculate the ratio of the circumference of a circle to its diameter, to an undetermined number of digits, Shigeru Kondo, a 55-year-old resident of Iida, assembled a computer with 32 terabytes of hard-drive capacity and used an application made by Alexander Yee, a 22-year-old student at a U.S. graduate school.

After Kondo repeated tests via e-mail, he began the computation on May 4, and the work lasted 90 days and about seven hours until it was completed on Aug. 3, including verifications, following difficulties including a power outage. He plans to apply for the Guinness Book of Records.

The mountainous task affected the daily lives of Kondo’s family. His wife, Yukiko, 53, said they had to pay 20,000 yen a month for electricity. The work was also threatened when their 29-year-old daughter used a dryer and threw a circuit breaker. Kondo managed to rescue the operation using a 10-minute backup power supply.

As the temperature of the computer room soared to near 40 degrees Celsius, Kondo avoided a hardware meltdown by removing casings and exposing computer parts to cooling fans.

Kondo has been engaged in computing the value of pi since calculating the value to 1,000 digits as a fourth-year technology college student. While working as a systems engineer for a food company, he repeatedly assembled computers using commercially available circuit boards and memory.

“This is for sheer self-satisfaction,” said Kondo, who spent 1.5 million yen on the computer used in the latest calculation.

But “I used only 60 percent of the computer’s total capabilities,” he said. “I want to try to compute the value to 10 trillion digits, possibly next spring.”