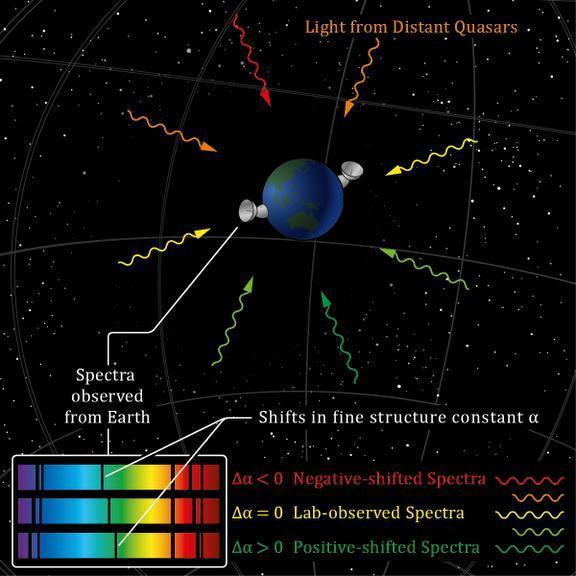 A team of Astrophysicists based in Australia and England has uncovered evidence that the laws of physics are different in different parts of the universe.

The report explains how one of the supposed fundamental constants of Nature appears not to be constant after all. Instead, this ‘magic number’ known as the fine-structure constant — ‘alpha’ for short — appears to vary throughout the universe.

“After measuring alpha in around 300 distant galaxies, a consistency emerged: this magic number, which tells us the strength of electromagnetism, is not the same everywhere as it is here on Earth, and seems to vary continuously along a preferred axis through the universe,” Professor John Webb from the University of New South Wales said.

“The implications for our current understanding of science are profound. If the laws of physics turn out to be merely ‘local by-laws’, it might be that whilst our observable part of the universe favours the existence of life and human beings, other far more distant regions may exist where different laws preclude the formation of life, at least as we know it.”

“If our results are correct, clearly we shall need new physical theories to satisfactorily describe them.”

The researchers’ conclusions are based on new measurements taken with the Very Large Telescope (VLT) in Chile, along with their previous measurements from the world’s largest optical telescopes at the Keck Observatory in Hawaii.

Julian King from the University of New South Wales explained how, after combining the two sets of measurements, the new result ‘struck’ them. “The Keck telescopes and the VLT are in different hemispheres — they look in different directions through the universe. Looking to the north with Keck we see, on average, a smaller alpha in distant galaxies, but when looking south with the VLT we see a larger alpha.”

“It varies by only a tiny amount — about one part in 100,000 — over most of the observable universe, but it’s possible that much larger variations could occur beyond our observable horizon,” Mr King said.

The discovery will force scientists to rethink their understanding of Nature’s laws. “The fine structure constant, and other fundamental constants, are absolutely central to our current theory of physics. If they really do vary, we’ll need a better, deeper theory,” Dr Michael Murphy from Swinburne University said.

“It’s one of the biggest questions of modern science — are the laws of physics the same everywhere in the universe and throughout its entire history? We’re determined to answer this burning question one way or the other.”

GizmoCrazed - September 29, 2014 0
Don’t you think there has been too much news on those first ones who got their hands on the Apple iPhone 6? What about...